Sikhism is the fifth largest religion in the world. Originating in the northern area called PUNJAB (state) of India and now Pakistan. Sikhism was initiated by Guru Nanak in late 1400 AD. Guru Nanak was the first Guru and the order ended with Guru Gobind Singh who was the last (Tenth) guru of Sikhs.

Sikhism believes in ONE God, shuns ritualism, idol worshiping and believes in humanity as a one race. It is a powerhouse for humanity with principles of sharing, caring and love for all.

The key highlights are –

The tenth Sikh Guru decreed that after his death the spiritual guide of the Sikhs would be the teachings contained in Guru Granth Sahib, so the Guru Granth Sahib now has the status of a Guru, and Sikhs show it the respect they would give to a human Guru.

The community of men and women who have been initiated into the Sikh faith is the Khalsa (the pure). 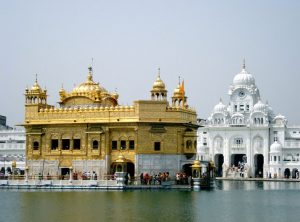 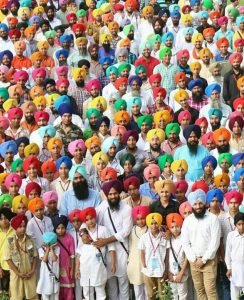 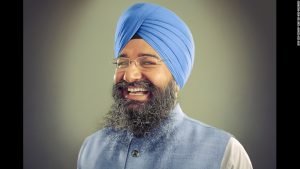 For more information or Queries on Sikhi go to SIKH WISDOM

The Sikh faith believes in One God that is present within all of creation and there are 3 Principles of Sikhism: 1. Earn an honest living 2. Share earnings with others/community 3. Always remember and meditate on God

The word Sikh means student. According to the Sikh Rehit Maryada, a Sikh is defined as “any human being who faithfully believes in One Immortal God; ten Gurus, from Guru Nanak to Guru Gobind Singh; Guru Granth Sahib; the teachings of the ten Gurus and has faith and belief in the Amrit initiation of the tenth Guru; and who does not owe allegiance to any other religion”

Sikhs are vehemently opposed to the differential treatment of people for reasons such as gender, race, or religion, which is reflected in Sikh teachings, philosophies, and practices.

Sikhs that are initiated into the Khalsa (the pure) commit to follow the Sikh code of conduct (Rehit Maryada). This includes a daily discipline of meditation and prayer and also wearing the five Sikh articles of faith or 5K’s at all times. 5 K’s are external manifestations of Sikh identity and represent inner spiritual convictions. They are as follows:

1. Kesh – unshorn hair symbolizing acceptance of God’s will; the hair must be kept covered at all times with a Keski or Dastaar (turban or head-covering) representing spiritual wisdom;

2. Kangha – a wooden comb representing self-discipline; worn in the hair and used to keep it neat and tidy;

3. Kara – an iron or steel bracelet worn on the wrist; the circle signifies the oneness and eternity of God and to use one’s hands for the benefit of humanity;

5. Kirpan – a stylized representation of a sword, which must be worn sheathed, re strained in a cloth belt, and next to the body; the Kirpan signifies the duty of a Sikh to stand up against injustice. Most Kirpans range in size from 6 to 9 inches in length.

What is the Sikh faith?

The Sikh faith is the fifth largest world religion with over 25 million devotees worldwide. It is a monotheistic religion founded in 1469, by Guru Nanak. It holds as its basic tenets, the equality of mankind, the equality of men and women, and the fundamental equality of all religions. Guru Nanak rejected idolatry and the caste system, and taught that there is a universal, gender less and formless God, who is accessible equally to all, irrespective of their race or religion.

Sikhs believe in One God who is the creator of the universe and resides within creation but is not limited to the creation. God is formless, fearless, and beyond birth and death. The purpose of human life is unite the Mind with God during one’s lifetime. This is possible through accepting the teachings of the Guru and following the “three tenets” namely, meditation on God’s name (Naam Japna), earning an honest living (Kirat Karna), and sharing one’s earnings with others (Vand shakna).

Sri Guru Granth Sahib is the Sikh scripture, that is also ‘The Living Guru’ for Sikhs and it is a beautiful collection of compositions of the Sikh Gurus and other saints and poets of diverse social, caste and faith backgrounds who united with God.

The Guru Granth Sahib was first compiled by the Fifth Sikh Guru Arjan Dev, in 1604 in the city of Amritsar. Its second and last version was updated by Tenth Master Guru Gobind Singh, and it was finalized at Damdama Sahib in the year 1705. He added the hymns of his father, Guru Tegh Bahadur, the Ninth Master, and a couplet of his own to the volume wrought a century earlier. Since then, the authorized version has been transcribed and printed a number of times, and it abides. Its adoration is an article of faith with the Sikhs.

What is the gurdwara & langar?

The Sikh place of worship is called the Gurdwara or “door to the guru” and serves as the most important Sikh institution. Gurdwaras are open to all people regardless of gender, faith or culture. Sri Guru Granth Sahib is installed in each Gurdwara and the congregation engages in the contemplation and singing of verses along with discourses on Sikh history and spirituality.

Each gurdwara contains a Langar or free community kitchen where all persons are welcome to share a free vegetarian meal. All Gurdwaras and Langars around the world are run by the volunteers.

For practicing Sikhs, the turban is essential to their identity, and removing it is inconceivable. The turban not only serves a spiritual function, but to reflect the Sikh belief in gender equality, humility, and the supremacy of God, but also serves the practical function of covering, and keeping in place the uncut hair of a Sikh.

The turban is not a religious symbol but an article of faith. While items like a crucifix or other jewelry are optional, the turban is mandatory and cannot be removed. Symbols are simply representations of the real object. The turban has a religious significance but it is much more than just a symbol. The identity of the Sikh is reflected in the wearing of the turban.

Role of Women in Sikhi

Sikh Scripture remains universally unique in that it demonstrates many of the principles of equality that Sikhs believe in. Women are given a significant role in Sikh scriptures, which are in many places written in the feminine voice and reflect a belief in a God who is referred to as both mother and father.

Guru Nanak (1469-1539) inspired people to feel the presence of God through hard work, family, community service and defence of the downtrodden.  A cornerstone of his philosophy was the emancipation of women, who faced significant discrimination in 16th century India.

In the society in which Guru Nanak lived, women were required to cover their faces before men, as a sign of humility and respect for men, who held a higher social status then women. Guru Nanak rejected this tradition, and stated that no woman should be required to cover her face before man, since God had created men and women as equals.